Mortgage rates have slipped even deeper into record territory and may fall more, possibly even under 3%, before the year’s end as the economy navigates the effects of the coronavirus.

The average 30-year fixed-rate mortgage fell to a record low of 3.07% this past week, according to Freddie Mac. That’s the lowest level in the nearly 50 years of the mortgage giant’s survey. The 15-year fixed-rate mortgage dropped to 2.56%.
The average rate for a 30 year-fixed mortgage dropped below the previous record low of 3.13% that was set in June and marks the fifth new low since March. A year ago, the rate was 3.75%.

The data suggests the recent rebound in economic activity has come to a halt over the last couple of weeks, with some declines in consumer spending and a pullback in purchase activity, according to Freddie Mac.

“Today’s report shows mortgage rates declined as investors reacted to the surge in Covid cases and the Federal Reserve’s concerned outlook for economic recovery,” said George Ratiu, senior economist at Realtor.com
Even with rates moving toward the 3% mark, lenders maintained tight underwriting standards which contributed to a decline in mortgage applications for the second consecutive week, he said.
close dialog
“Mortgage rates this low, coupled with current demographics favoring homeownership, would normally lead to strong sales activity,” he said. “However, getting approved for a loan is proving to be a difficult challenge for many, especially first-time homebuyers who struggle to come up with a 20% down payment.”
The national housing market saw a glimmer of hope this week as an index measuring homes in contract to sell, or pending sales, jumped by a record 44% in May, according to the National Association of Realtors.
But the longer term picture is murkier. Ratiu said real estate markets are moving through a transition period.
“On one hand, buyers are clearly returning to the market, eager to take advantage of low interest rates while moving toward a new normal,” he said. “On the other hand, the strong resurgence in Covid cases, especially in Sun Belt states, along with broader economic uncertainty during the current recession, is holding many sellers back from entering the market.” 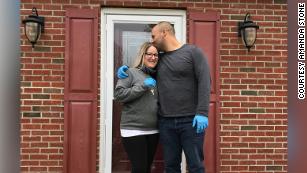 These people bought homes without ever stepping inside
This week mortgage applications dropped 1.8% from the week before, according to the Mortgage Bankers Association’s weekly application survey.
“Investors are contemplating the risks of the recent resurgence of Covid-19 cases to the labor market and economy, and Treasury rates and mortgage rates are moving lower as a result,” said Joel Kan, MBA’s associate vice president of economic and industry forecasting.
“The weakening in activity is potentially a signal that pent-up demand is starting to wane and that low housing supply is limiting prospective buyers’ options,” he said.
Source: www.cnn.com